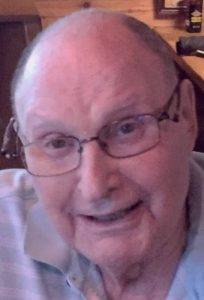 A memorial service was held at 11:00 a.m. on Thursday, November 16, 2017 at Rohde Funeral Home in Kingsley, Iowa, with military honors provided by United States Army.  Burial of cremated ashes will be at a later date in Traverse City, Michigan.  Condolences may be sent to the family at www.rohdefh.com.

Arthur was born April 23, 1926, Kingsley, Michigan, the son of Norman O. & Violetta (Baldwin) Wyckoff.  He grew up in Traverse City, Michigan, graduating from high school in 1944.

Following graduation, he entered the Army Air Corps on July 7, 1944. He served in Europe during World War II until his honorable discharge June 24, 1946.  After that, he returned to Traverse City, Michigan, where he married Carol L. Coddington.

Following their marriage, Arthur and Carol bought an office supply store in Traverse City that they owned and operated until retirement.

Arthur was a Boy Scout leader for many years, and he belonged to the Elks Club.

Arthur was preceded in death by his parents; his wife, Carol; one sister and four brothers.