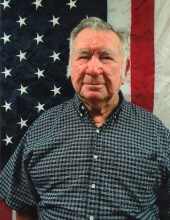 A funeral service was held at 10:30 a.m. on Wednesday, November 22, 2017, at the United Methodist Church of Anthon, Iowa. Pastor Sheryl K. Ashley officiated. Committal Service followed in the Oak Hill Cemetery, with Military Rites conducted by the McNiff Post No. 389 of the American Legion of Anthon, Iowa.

The Armstrong – Van Houten Funeral Home of Anthon, Iowa is in charge of the funeral arrangements. Condolences may be sent online at www.armstrongfuneral.com.

After high school, he served in the U.S. Marines Corps from 1951-1954. He was stationed overseas in Korea as a Corporal Gunnery Sergeant.

After being discharged, Chub had several different occupations with his last being a proud farmer and cattleman.

Chub enjoyed hunting and fishing. He loved farming and tending to his cattle.

He will be lovingly remembered by his six children: Jessica Lynn of Ames, IA; Phirman of Anthon, IA; Racheal of Nevada; Patricia of California; Toni Lee of Sioux City, IA; and Denise of Texas; as well as 20 grandchildren and 25 great-grandchildren, and numerous extended family and friends.

Chub was preceded in death by his parents, Phirman and Rachel Downing, and five sisters: Bernice, Betty, Dorothy, Mary Ellen, and Gladis.