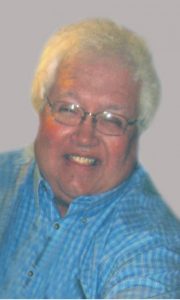 Gregory Scott Petersen, 66, of Danbury, Iowa, went to be with his savior on Friday, November 17, 2017, at Unity Point Health – St. Luke’s Hospital of Sioux City, Iowa.

Greg was born to Merlin and Madjel Petersen of Danbury, Iowa on May 21, 1951.  The first of four children, he attended Anthon-Oto Community School and graduated in 1969.  Upon graduation, he attended Wayne State College.  Later, he returned to the family farm to work with his father, Merlin and then his brother, Kirk.

He retired from farming in 1999 and went to work for MCI for several years until retiring due to health issues.

Greg loved to fish, hunt and play cards.  He always had a secret pond with all the best fish!  Greg also enjoyed golfing earlier in his life until vision and health issues prevented him to continue.

He adored his nieces and nephews as much as they him.

He loved cats and cared for them most all his life.  His present cat, Kitty, meant the world to him.

He was preceded in death by his father, Merlin; his mother, Madjel; and a nephew, Mark.