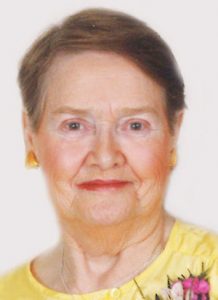 Madonna A. Harrison, 92, of Sioux City, formerly of Lawton, went to Heaven on Sunday, November 12, 2017 at home with her family in Sioux City.

Private family graveside services will be in Memorial Park Cemetery with Christy-Smith Funeral Home of Morningside assisting the family.

Madonna Adele Keene was born September 10, 1925. She was raised in the South Bottoms of Sioux City. As a child, she attended Church of the World and Central High School.

Madonna was the youngest of Hyacintha (Mullin) and David Keene. Her brothers were Joseph, Richard, and Eugene Keene (deceased).

Madonna married Bud Harrison on October 20, 1943. They raised their family on their farm, located in the Lawton-Kingsley area.

She dedicated her life as a loving and caring mom to her four children. The best medicine in the world was mom’s hug.