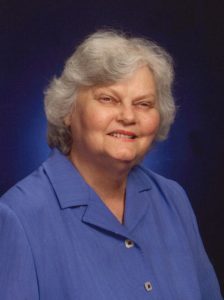 The Armstrong – Van Houten Funeral Home of Anthon, Iowa is in charge of the funeral arrangements. Condolences may be sent online at www.armstrongfuneral.com.

Colleen E. Kollbaum was born on August 22, 1936 near Oto, Iowa. The only child of Joe and Elsie (Bierwirth) Phillips, she grew up on the family farm and attended #6 Grant country school.

Colleen graduated from Oto High School with the class of 1954. She went on to further her education, obtaining her teaching certification from Wayne State College.

Colleen taught third grade in Castana, Iowa and served as a substitute in Anthon, Iowa.

On June 2, 1957, she was united into marriage to Merlin Kollbaum at the Church of Christ in Oto, Iowa. The couple farmed near Ida Grove, Iowa and then moved to the Anthon Oto area.

Colleen was an active member of the United Methodist Church of Anthon, Iowa.  She enjoyed bible study and was involved with the UMW. Colleen also belonged to a local card club and the Anthon Women’s Club.

Colleen cherished her many pets, birds, dogs, and wild animals. She especially treasured her time spent with her children and grandchildren, and family get-togethers.

Colleen was preceded in death by her parents, Joe and Elsie Phillips; her maternal and paternal grandparents; and her aunts, uncles, and cousins.