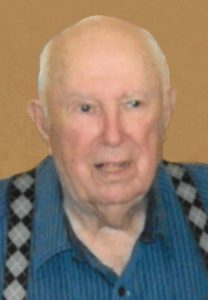 Pallbearers were Ron, Tom and Gary Fischer, Tom Ross, Brody and Collin Elkins. Honorary pallbearers were members of the Sioux City Fire Department.  Condolences may be offered online at www.meyerbroschapels.com.

Ray was born April 8, 1926 on the family farm south of Moville, Iowa. He was one of nine children born to Otto and Annie (Wieck) Keuck.

Ray was baptized and confirmed at Trinity Lutheran Church in Moville. He attended schools in Moville.

At age 17, he was drafted. He served with the U.S. Army from 1944 to 1946 during World War II. He fought in the Battle of the Bulge and was awarded the Combat Infantry badge. He was honorably discharged with the rank of Corporal.

Ray came to Sioux City in 1950. He worked as a mechanic for the Sioux City Fire Department for 26 years and retired in 1988. He also did some mechanic work at the airbase.

When he moved to Elk Point two years ago, he joined the American Legion Bert L Smith Post 134.

Survivors include his three siblings: Doris Grasma of Sioux Falls, SD; Velma Linerrud of Spokane, WA; and LaVern Keuck of Denison, IA; and many nieces and nephews and their families. He also was blessed with his special family: Darrell (Jean) Elkins, John (Carol) Elkins, Darlene (Dan) Olson, Janice (Larry) DeBuhr, Sheryl (Gale) Elkins and Sis Elkins and their families.

He was preceded in death by his parents; his siblings: Gertrude Parkinson, Hattie Ledgerwood, Lydia Fischer, Chris Keuck and Vesta Davis; several nephews; and Darrell and Peggy Elkins.

Memorials may be made in his name to the American Legion or the Disabled American Veterans (DAV).