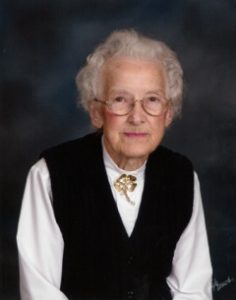 Ella Balk, age 99, of Moville, passed away on Friday, November 24, 2017 at the Kingsley Specialty Care of Kingsley.

A funeral service was held on Tuesday, November 28, 2017 at 10:30 a.m. at the Trinity Lutheran Church of Moville with the Rev. Barb Spaulding officiating.  Burial was at the Arlington Township Cemetery of Moville.

Ella was born to Johanna (Stumpel) and Herman Balk on November 22, 1918 on her family’s farm.

She was baptized into the Lutheran faith on December 15, 1918 in the family home.  She was confirmed on August 6, 1933 at the Trinity Lutheran Church of Moville where she was a lifetime member.

Ella grew up on the farm and attended country school through 8th grade.  She went on to graduate from Moville High School in 1936.

Ella met William Knaack of Correctionville through the Luther League in the 1930’s and was engaged to be married in the early 1940’s.

William was called to serve his country, and he was killed in action in the Philippines in January 1945.

Ella lived at home to care for her father until his death in 1953.

After his death, she attended National Business Training School in Sioux City, studying business and learned to become a secretary.  She worked in Kingsley for many years as a bookkeeper.

She enjoyed caring for her yard and flowers and doing word search puzzles, along with her church friends and her family.

She served on the church altar guild and was a member of several church circles.

She is preceded in death by her parents; her brother, Carl (Mary) Balk; her sisters, Emma (Ed) Zellmer, Johanna (William) Koetke and Frieda (Clifford) Wahlberg; and her nephews, Rev. Richard (Minona) Zellmer and Kenneth Zellmer.