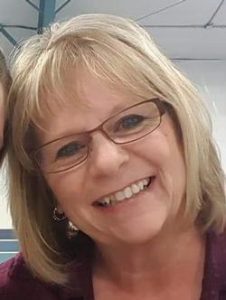 Judy Morton, 62, of Salix, Iowa, passed away November 26, 2017 at home, surrounded by her loved ones. She fought a very brave 15-month battle with brain cancer.

Funeral services were held at 10:00 a.m. on Wednesday, November 29, 2017 at the Salix United Methodist Church, with Rev. Catie Newman officiating. Burial was in Lincoln Township Cemetery in Whiting, Iowa. Arrangements are under the direction of Waterbury Funeral Service of Sergeant Bluff.

Judy Ann King was born October 13, 1955 in Sioux City, IA to Earl and Elsie (Schumacher) King. She was raised in Correctionville, Iowa as the youngest of 5 children.

In 1974, she graduated from Eastwood High School in Correctionville. She later obtained an Associates of Art Degree from Western Iowa Tech in Sioux City.

After graduating from WIT, she began working at Mid-Step Services in Sioux City as a graphic designer.  She remained employed there for 28 years, and while she was adamant on working throughout her illness, she finally retired this last September.

Throughout those years, she made countless lasting friendships and inspired many who got to know her.

In 1974 she married Rick Deeds, and together they were blessed with 3 amazing sons: Brandon, Trenton (TJ), and Jason. Though they later separated, they continued to remain friends.

In 1994 she was united in marriage to Kevin Morton. With that union she gained two wonderful step-daughters, Rachel and Krystin. She and Kevin lived in Sloan, Iowa for many years before settling in Salix where they remained at the time of her passing.

Judy had a great passion for life and helping others. She was committed to volunteering her time with many organizations, most notably the Sioux City Cosmopolitan Club. She was a member for over 25 years, and in 1999, she was elected their first female president.

Judy had a strong faith in the Lord, and she knew he was by her side through her final journey. She was an active member of the Salix United Methodist Church, selflessly volunteering for all that she was able.

Judy was a very devoted wife, mother, daughter, and grandma. She was never happier than when she was surrounded by her family. She beamed with pride over all her grandchildren and spent many hours at ball games, concerts, and dance recitals.

On weekends before her illness, she could be found enjoying the outdoors at a local campground with Kevin and their loyal dog, Casey.

Judy loved family vacations. She especially enjoyed visiting the beautiful mountains of Wyoming near the home of her son.

Judy will be forever missed, but she will remain in our hearts always.

In memory of Judy, please remember to always live with a welcoming heart, an open mind, and a giving spirit. The world needs more of her.