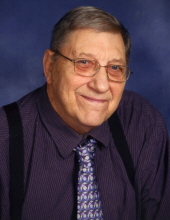 Larry L. Keck, 80, of Marshall-town, Iowa, passed away in the comfort of his home on the morning of November 22, 2017, with his loving family by his side.

Funeral services for Larry were at 11:00 a.m. on Saturday, November 25, 2017 at Faith Assembly of God with Pastor Dave Martin and Pastor Jon Keck officiating. Mitchell Family Funeral Home is caring for Larry and his family.

Following high school, he went on to graduate from Westmar College with the class of 1961.

From 1956-1964 Larry honorably served our country by enlisting in the United States Navy as a National Guard Reserve.

On February 22, 1958, Larry was united to the love of his life, Dessie Lavon Howland, at the College Church located in Le Mars, Iowa.  From this union, five children were born: Rob, Mark, Jon, Deanna and Kris.

Larry was a very hardworking and dedicated man.  He was a proud member of Faith Assembly of God Church, where he served as a Deacon for 40 years.