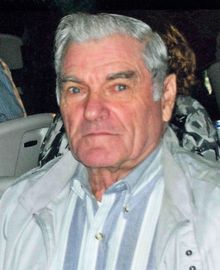 Jim was born January 5, 1933 in Kingsley, Iowa, the son of Everett E. and Ett (Bainbridge) Woods.  Jim grew up in Kingsley, graduating from Kingsley High School in 1951.

After graduation he farmed for two years before entering the Army in September of 1953. There, he served until his honorable discharge in 1955.

After his discharge he returned to Kingsley, where he and Patricia A. Barthole were married January 12, 1956.  They made their home and raised a family on their farm in rural Kingsley.

Jim continued farming until his retirement in 2000.  In 2003, Jim and Pat moved to Le Mars, where they now live.

Jim was a member of St. Michael Catholic in Kingsley until moving to Le Mars, where they became members of St. James Catholic Church.  He was also a member Wasmer American Legion Post 241 of Le Mars.

Jim loved his family and enjoyed the times they shared together.

Jim was preceded in death by his parents; two sisters, Grace Spangler and Blanche Conaway; in-laws Nick and Velma Barthole and Jerry and Janice Barthole; a sister-in-law, Shirley Hedisch; a nephew, Terry Conaway; and a niece, Diane Hemmelman.