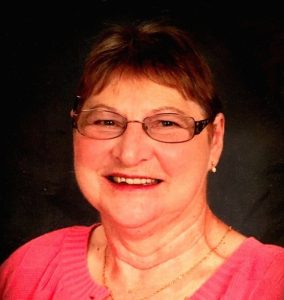 A funeral service was held on Wednesday, December 13, 2017 at 10:00 AM at the Nicklas D. Jensen Funeral Home of Correctionville with the Rev. David R. Koehler officiating. Burial will be at the Oak Hill Cemetery of Anthon.

The Nicklas D. Jensen Funeral Home of Correctionville is in charge of the arrangements.   Online condolences can be made at nicklasdjensenfh.com

Lyla L. Paulsen was born January 31, 1939 to Luella (Balster) and John Zylstra near Sibley, Iowa. She was a graduate of Sibley High School.

She was united in marriage to Henry Paulsen, Jr. on November 17, 1961 at the First Presbyterian Church in Sibley. To this union, three sons were born: David, Randall and Mike.

Lyla worked at the Osceola County Courthouse, at Farm Bureau as an Insurance Secretary and finally as a hostess at McDonald’s until 2016. She was a member of the First Presbyterian Church of Sioux City.

She enjoyed taking bus tours of North America, scrapbooking, crocheting, playing cards with friends, and the board game Aggravation. She also enjoyed spending time visiting with friends and family and doing puzzles and word searches.

She is also survived by two brothers, Dr. Dennis (Ronnie) Zylstra of Spencer, IA and Glenn (Verna) Zylstra of Sheldon, IA; and numerous nieces and nephews.

She was preceded in death by her parents and two sons, Randall and David Paulsen.