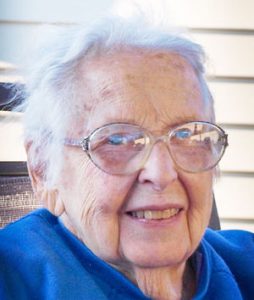 At Melva’s request, there will not be a funeral, ceremony, or memorial gathering. Arrangements are under the direction of Meyer Brothers Morningside Chapel.

Melva was the third and youngest child of William D.  “Wid” Smith and Pearl Mildred (Stewart) Smith who precede her in death.

Melva was born in her parents’ home in Hornick, Iowa on June 23, 1922. She attended the Hornick Public School, entering in 1928. She graduated at the top of her class in the spring of 1940.

After graduation, she attended the National Business Training school in Sioux City and worked part-time at her brother Darrel’s cafe in Hornick. She did not marry.

Her first full-time career position was at the West Hotel in Sioux City. Melva worked at the West until it was demolished in 1953 and then became an employee at the Martin Hotel.

In 1958, she started to work at the Thorpe Cattle Company at the Stockyard Exchange Building. She continued this job until 1969, living in Sioux City and commuting to Hornick on her days off to help her folks and family.

In 1969, Melva’s parents’ health failed and they passed away. Soon after, Melva started her retirement in Hornick, living first in the old family home and later moving to a mobile home she kept on the property.

Melva began kidney dialysis in 1998, treatments that continued until her death. In early 2002, her disability required her to move to a nursing home — first in Whiting, Iowa, then in Morningside.

Melva was an inveterate newspaper reader and clipper. She saved large numbers of clippings of family and Hornick happenings from the 1940s and later.

She loved to correspond with extended family and kept many letters and cards from Iowa and South Dakota family and friends.  She was a woman of fierce independence, no-nonsense talk, and sharp wit. More importantly, she was a thoughtful, kind, and gentle lady.