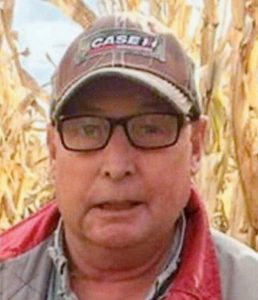 Marvin “Marv” Lawrence McDermott, 62, of Kingsley, passed away peacefully Thursday, December 14, 2017 at his residence in Kingsley, surrounded by family.

Rohde Funeral Home in Kingsley is handling funeral arrangements. Condolences may be directed to the family at www.rohdefh.com.

Marvin was born December 19, 1954 at St. Vincent Hospital in Sioux City, Iowa, the son of Lawrence & Arlene (Goebel) McDermott.  He was raised on the family farm north of Kingsley.

He attended Kingsley-Pierson School graduating in 1973.  After graduation he attended Briar Cliff for two years before transferring to Iowa State, where he graduated in 1977 with a degree in Diary Science.

Upon graduation he returned home to farm with his Dad.  After his Dad’s death in 2006 he continued to farm, he planted his first seeds in 1977 and harvested his last in 2017. As Paul Harvey said … “So God made a farmer.”

Marvin enjoyed hunting and fishing with his dad and his brother, Gerald. He liked attending his nieces and nephew’s activities.

Marvin was proud to share his birthday with Gerald on December 19th. He always said they were twins, born eight years apart.

Marv was an avid Cyclone fan. This fall he was a special guest of ISU AD, Jaime Pollard for the ISU/Kansas football game.  He also enjoyed attending Briar Cliff University activities.

Marvin was a member of the Knights of Columbus, First COOP, and Farm Bureau.

Marvin frequently visited Trinity Heights, spending time in prayer. He was a humble soul with a very big heart, loving every moment he was able to spend with his dad, mom, and family.

Preceding Marvin in death were his father, Lawrence McDermott; a brother, Gerald McDermott; and grandparents Walter and Opal McDermott and John and Martha Goebel.