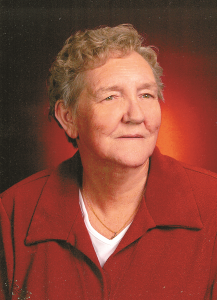 The Nicklas D. Jensen Funeral Home of Correctionville is in charge of arrangements.

Mary Kroll passed away peacefully in her home in Correctionville, Iowa on December 6, 2017 at the age of 88.

Mary was born in Climbing Hill, Iowa on October 21, 1929. She was the daughter of Frank Myrtue and Opal (Shoening) Myrtue.

Mary grew up on a farm near Correctionville. She met John Kroll and married him on November 5, 1946.

John and Mary resided in the Cushing, Iowa area until 1949 and then settled in Hinckley, Minnesota where they bought a farm. During that time, they raised six children.

Later they started a trucking business and they each had their own red Chevy straight truck. John and Mary owned the trucking business for 18 years. They loaded livestock from area farmers in the morning and delivered it to the South St. Paul stockyards. Never wanting to come back empty, they would pick up freight for the surrounding merchants and feed stores.

Mary was proud knowing her husband John had delivered building materials to the now well-known restaurants in Hinckley, Cassidy’s Restaurant and Tobies Restaurant. Tobies is famous for their caramel rolls.

At the time Mary only knew of one other female truck driver in the state of Minnesota. Mary unloaded the trucks by hand when delivering to the feed stores, one or two bags at a time.

She was described by those that knew her as being a very strong woman.

After the sale of the trucking business, Mary worked at Plastics in Rush City and helped John with the farming.

Mary made sure her children went to the First Presbyterian Church Sunday School class every Sunday, and stressed the importance of perfect attendance in school.

Her husband John was killed in a pickup/train accident on December 21, 1982. Shortly after that, Mary gave up farming, quit Plastics in Rush City and moved to Correctionville, Iowa, to take care of her elderly parents until their deaths.

While caring for her parents, Mary taught Sunday School, kept a garden and enjoyed working on her knitting machine.

Mary made sure she was there for all the grandchildren’s graduations, weddings, bridal showers, and even Grandparents Day if she was invited; she was always the one that drove the farthest. She never wanted to be late for anything and never wanted to miss an event.

Mary was a wonderful cook, enjoyed canning and gardening, and was a talented crafter. If you still have a jar of her delicious apple butter, you have a family treasure. She also went to many craft fairs and sold many knitted items.

She is survived by her grandchildren:

• Grandson Austin Kroll and partner Krystal have given Mary one great granddaughter.

She will be missed by all.

A funeral will be held at First Presbyterian Church in Hinckley in the spring.

Mary will be laid to rest at New Birchwood Cemetery in Pine City, Minnesota, next to her husband John.