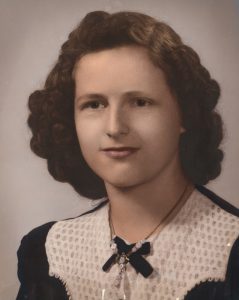 Opal M. Regennitter, age 85, of Marcus, formerly of Washta, passed away on Friday, December 8, 2017 at the Heartland Care Center of Marcus.

The Nicklas D. Jensen Funeral Home of Holstein is in charge of the arrangements.  Online condolences can be made at nicklasdjensenfh.com.

Opal was united in marriage to Maurice “Morey” Regennitter on February 24, 1961 in Unionville, Missouri.  To this union, four children were born.

She is also survived by four brothers and sisters and many beloved nieces and nephews.

Opal was preceded in death by her parents; her husband, Morey; a son, Dale; and four brothers and sisters.