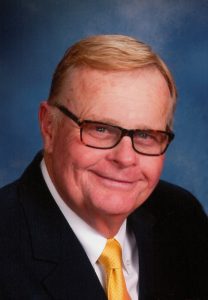 Services will be at 2 p.m. on Thursday, December 21 at United Methodist Church in Holstein, with the Rev. Doresa K. Collogan officiating. Burial will be in Holstein Cemetery.

Arrangements are under the direction of Nicklas D. Jensen Funeral Home in Holstein. Online condolences can be made at nicklasdjensenfh.com.

Paul L. Larson was born on Jan. 19, 1949 to Richard and Phyllis (Anderson) Larson in Manning, Iowa. He was a graduate of Irwin Kirkman High School, and he earned a Bachelor’s degree in agronomy at Iowa State University.

He was united in marriage to Vicki Doll West on March 19, 1967, in Irwin, Iowa. To this union, three children were born: Stephanie, Jason and Andy.

Paul and Vicki raised their family in Holstein. Paul started his career as a Trojan Seed Corn salesman for two years and then opened Paul Larson Insurance, which he and Vicki operated for 43 years in the Holstein, Galva and Cushing communities in Iowa.

Paul was very community-minded, and always a willing volunteer. Throughout the years, he was a member of the Jaycees, Holstein Country Club, Pheasants Forever, Kiwanis, Abu Bekr Shriners, Masonic Lodge, Holstein Chamber of Commerce, GH Foundation and the Lohff Schumann Recreation Center Board.

He was a mentor for the Eagle Scouts and helped with missions at United Methodist Church, where he was a longtime member. In his free time, Paul enjoyed golfing, hunting, going to the West cabin, automobiles and spending time with family.

Paul will be fondly remembered as a very forgiving man and when he did something, he was “all in.” Everyone knew when Paul walked into a room by his big voice and personality, and when he left, they knew he had been there by the faint smell of his signature Polo Ralph Lauren cologne that was left behind.

He was preceded in death by his parents; an infant sister, Pauline; his grandparents; his parents-in-law, Frank and Margaret West; and several aunts and uncles.

In lieu of flowers, memorials may be directed to United Methodist Church.