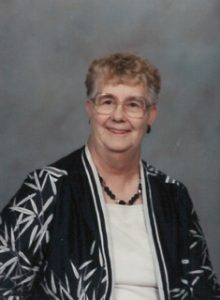 Viola M. Nash, age 87, of Moville, passed away on Monday, December 11, 2017 at the Holy Spirit Retirement Home of Sioux City.

A funeral service will be held on Friday, December 15, 2017 at 10:30 AM at the United Methodist Church of Moville with the Rev. Janet Rieckhoff-Faris officiating. Burial will be at the Arlington Cemetery of Moville. A visitation will be held one hour prior to the service starting at 9:30 a.m. at the church.

After graduating from Little Rock High School, she attended Iowa State Teacher College in Cedar Falls, Iowa and taught in the rural schools of Little Rock and Kingsley school districts.

After she was married, she eventually attended Tyler’s Beauty School in LeMars, Iowa and then owned and operated Vi’s Beauty Shop in Moville for over 20 years.

She was united in marriage to Robert D. Nash on December 16, 1950. They made their home in Moville and raised their three sons. After retiring, she and Bob traveled extensively, having visited 48 of the 50 United States.

They enjoyed 54 years of marriage together before Bob passed away in 2004.

Viola loved playing golf and was an avid sports fan. She was the first woman president to serve on The Meadows golf course board.

She loved to cook and nobody ever visited without getting something to eat, but her true joy in life was her sons and her grandchildren.