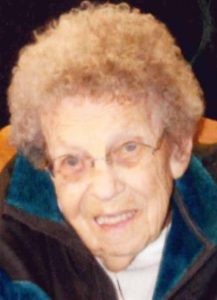 Services were held 11:00 a.m. on Tuesday, December 26, 2017 at Waterbury Funeral Service of Sioux City. Burial will be at Banner Township Cemetery.

Altha was born on May 4, 1919 on her parents farm near Lum Hollow Stock Farm, just east of Holly Springs, Iowa. She graduated from Holly Springs High School in 1936.

On December 28, 1942, Altha was united in marriage to Stanley Bos. Stan was in the in the United States Army and after the wedding, he was stationed in Alabama. Altha soon joined him and worked on the military base, trimming hats and packing coffee.

Following his honorable discharge, they moved back to Iowa to raise their family — two daughters: Judy and Patricia. Stan passed away in 1979.

Altha was a great seamstress, making doll clothes and outfits for her daughters. She loved the outdoors and spent 20 winters traveling with her sister, Elda, and brother in law, Ron, which greatly enjoyed. Altha was a member of the German City Church.

Altha was preceded in death by her parents, her husband, and brothers Chet and Ervin Claus.