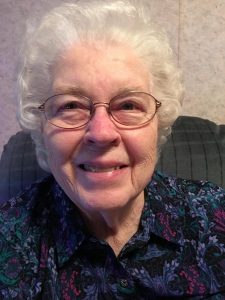 Services were held December 23 at 10:30 a.m. at Immaculate Conception Catholic Church in Cherokee. Burial was at Sunset View Cemetery in Washta.

Delora Jean Mitchell — lovingly known as DJ or Lorge — was born February 8, 1933 in rural Woodbury County. She was the oldest child of Marion and Ida Mae (Schieuer) Hackett.

She attended elementary school in Moville until 8th grade. Then they moved to a farm southeast of Moville, where she attended country school. She graduated from Climbing Hill High School in 1951, and she continued her education at National Business Training (NBT) School in Sioux City.

She married Ira Duane Mitchell on June 1, 1952, at Immaculate Conception Catholic Church in Moville, Iowa. The couple lived in the Sioux City, Climbing Hill, and Quimby area until they bought a home in Washta in 1976. Ira passed peacefully on May 16, 1996, surrounded by family.

Delora worked in the Western Electric Office in Sioux City until they moved to a farm in the Climbing Hill area and began their family.

Delora loved being a homemaker, caring for her large family, cooking, sewing, gardening, and preserving food. She had a cake decorating business for several years, and she especially enjoyed making wedding cakes.

She was an active member of Saint John the Baptist Catholic Church in Quimby. While she was a member at St. John’s, Delora was a lector, Eucharistic Minister, greeter, and served on the Liturgy Committee. She held various offices on the Parish Council, the Cluster Council, and Saint Helen’s Guild. She was the Youth Minister for many years. She also taught CCD for many years.

She especially enjoyed family gatherings and long, primitive camp-outs with family and friends. She often commented about how blessed she was to have such a large, loving family. Delora remained in her home in Washta until December of 2016, when she moved to Cherokee Specialty Care.

Left to cherish her memory are three sons: Warren and his wife Jan of Aurelia, Iowa; Michael of Alta, Iowa; and Jeff and his fiancee Tracy Halfen of Springfield, Missouri; three daughters: Annette of Cherokee, Iowa; Carolyn and her husband Phil Wright of Cherokee, Iowa; and Jennifer Brenner of Galva; one son-in-law, Dana Williams of Ames, Iowa.

She is also survived by 19 grandchildren, 27 great-grandchildren, and one great-great-grandchild, as well as three sisters: Elaine Dyslin of Norfolk, Nebraska; Carol and husband Don Gerjets of Cherokee, Iowa; and Phyllis Ann and her husband Lee Campbell of Smyrna, Tennessee; and many nieces, nephews, cousins, and friends.

She was preceded in death by her parents; her husband; a daughter, Cathie Jo Williams; an infant granddaughter, Jessica Tye; a great-granddaughter, Brianna Lame; a grandson, Nicholas Volkert; a niece, Jill Hackett; a sister, Karen Rae Bergert; brothers Duane and Darrell Hackett;  a brother-in-law, Harold Dyslin; and a sister-in-law, Iva Jean Hackett.