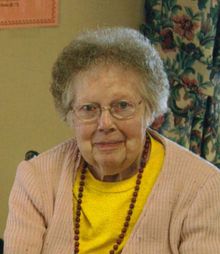 Hilda was born August 6, 1922, the twin daughter of Ernest H. Schaeffer, Jr. and Katie (Bauer) Schaeffer on a farm east of Salem Lutheran Church in rural Correctionville, Iowa.
She attended Rutland #8 School, which is now a home in Pierson, Iowa.

Hilda graduated from Pierson High School in 1939. After graduation, she continued to live on the farm she was raised on.

On May 4, 1948 she married Orlan Dragoo in Kingsley, Iowa. After their marriage, Hilda and Orlan farmed in the Rock Branch area until purchasing a farm from her aunt, Hulda Rarick. It was 3 ½ miles southwest of Pierson, Iowa.

Hilda was very active in helping Orlan with farming chores and raising livestock, along with raising a very large garden each year which she gave great care. Their farm is now a century farm.

Hilda was a 6½ year member of Woodbury County Farm Bureau. She was also a 74-year member of American Legion Auxiliary, where she held the office of treasurer for 27 years.

Hilda is survived by her twin sister, Hulda Anfinson of Kingsley, IA; and a sister-in-law, Erma (Phillip) Severson of Sioux City, IA; and many nieces and nephews, and several friends.

Hilda was preceded in death by her parents; her husband Orlan, who passed away in 1992; a brother and his wife; and two sisters.