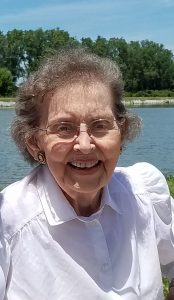 Norma Jean Vesti Glassburner, 89, of Council Bluffs, joined the heavenly choir after a long illness to sing with the angels there. She died December 24, 2017 at Correctionville Specialty Care in Correctionville, Iowa.

Norma’s singing career started at the age of 10 when she sang at an amateur contest with Bobby Beers, who later became the vocalist with the Lawrence Welk Orchestra.  She came in 2nd place.

Her love of music began as a small child at home with her family, who saw to it that she was surrounded by music.  She was later offered a job with the Lawrence Welk Orchestra, but she declined because she was only 15.

She graduated from Correctionville High School in 1946 and went on to get a two-year degree from Iowa State Teachers College.

While teaching in Washta, Iowa, she met her future husband, Fred Glassburner.  They both ended up in Nashville, Tennessee and Norma received her BA degree from Peabody College, a part of Vanderbilt University.  They married on December 28, 1956.

While in Nashville, she also concentrated on her singing career with the Carl Galvin and Owen Bradley Orchestras among other opportunities while going to college.

Her love of music and teaching was continued through her adult life, taking her to California, Wisconsin, Minnesota and back to Iowa where she and Fred settled in Council Bluffs.  She wasted no time returning to the stage and joined the Mort Wells Band traveling extensively in the area.

After she tired of the traveling, she suggested to Fred that they start their own band, which they did. They were making a name for themselves throughout the area known as the Fred and Norma Glassburner Orchestra until Fred died unexpectedly in 1987.

She declined offers to sing with several bands for many years until 1998, when Norrie Egger asker her to join his small combo.  She was 70 years old.  She didn’t have to travel, so she accepted and sang with him for ten years.

She was preceded in death by her husband, Fred; her parents, John and Maren Andersen; three brothers, Moss, Whitey and Richard; and a nephew, Richard.