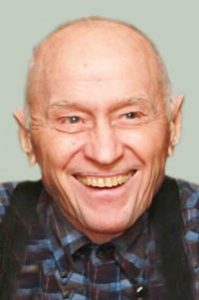 In lieu of flowers the family requests that memorial donations be made to the Bishop Heelan Pride Campaign for the completion of the gymnasium portion of the new school or Hospice of Siouxland.

The family would like to pay a special thanks to Hospice of Siouxland, Bickford Cottages and Synergy Home Care.

Paul was born Dec. 26, 1922, in Meridan, Iowa to Richard and Clara (Jones) Niles. He grew up in Cherokee County, Iowa and graduated from Aurelia High School in 1940, where he lettered in football and track.

Paul went on to attend Nettleton Business College. In 1943, he enlisted in the U.S. Navy and served on the USS Manila Bay (CVE-61) in the South Pacific during World War II and was honorably discharged in 1946. Over the years, Paul and his family enjoyed traveling to the reunion of members who served on the Manila Bay.

In 1943 he met Gladys Vondrak at the Skylon Ballroom and they were married on July 14, 1946. After returning from the war he began working as a bookkeeper for Sioux City Brick and Tile. Paul and Gladys raised six children in Sioux City and enjoyed attending their events and later the grandchildren.

Paul and Gladys were active members of Blessed Sacrament Church. Paul was a 4th degree member of the Knights of Columbus. In 1977 he completed a Cursillo retreat and was active in that movement.

In 1991, Paul met the second love of his life, Darlene (Junck) Funk. They married on Oct. 5, 1991. After marrying, Paul relocated to Moville, Iowa, and he retired in 1992 after 47 years of employment with Sioux City Brick and Tile.

Paul and Darlene blended their two families and were avid attendees at the grandchildren’s sporting events at Bishop Heelan, Creighton University and Morningside College. Paul and Darlene lived on the golf course in Moville and played several rounds of golf during the week, leaving the course to the “amateurs” on the weekends.

Paul was preceded in death by his parents; wives, Gladys and Darlene; his daughter, Judy Welte; brothers, Alvie and Harold and a sister, Ruby Murry.