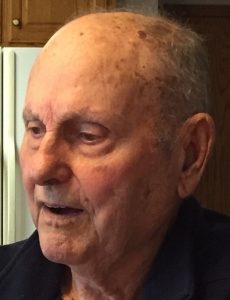 Services were held at 11 a.m. on Thursday, December 28 at Rohde Funeral Home in Kingsley.  Lunch followed the memorial service, and there will be no burial service.

Wayne was born in Kingsley to Ella M. (Jaacks) Mathers and Ralph V. Mathers on Aug. 24, 1925. He grew up in rural Correctionville, where his family farmed. He graduated from Correctionville High School in 1942.

In 1943, he joined the U.S. Navy at the age of 18 and served as a machinist mate on a PBY seaplane in the Pacific Theater until he was honorably discharged at the end of World War II.

Wayne married Norma L. Fitch in San Diego in 1945. They raised six daughters and five sons. They lived for short periods in Kingsley, Sioux Center and Meriden, Iowa, but they eventually settled in Correctionville.

Wayne worked as a mechanic and farmer. Later, he worked for several years as a heavy equipment operator for Sioux City Engineering. He then spent a few years operating equipment for his sons’ business, Mathers Construction, before finally retiring at the age of 73.

He was active for years in local chapters of the VFW and Legion.

Wayne and Norma divorced after 38 years, and except for his final four months, he spent his last 33 years living independently in Kingsley and doing exactly as he pleased.

Wayne was large, loud and unforgettable. He was athletic well into his 60’s, and as he aged, he managed to look 20 years younger than he was.

He especially liked being around children, always asking them about their individual interests and activities and also mildly frustrating them to see how they’d react.

Wayne enjoyed home-cooked meals and family gatherings. He was generous with his time and resources, especially when he sensed that a friend or relative was in a bind. He had a quick wit, an endless capacity to learn, an expansive memory, a tendency toward disruption, and a devastating ability to turn a phrase.

He is also survived by three sisters — Norma Pinkerton, Janice Pfaffle and Marge Laddusaw — and a brother-in-law Neal Pinkerton, all of Kingsley; as well as a sister-in-law, Bonnie Mathers of Sioux City.