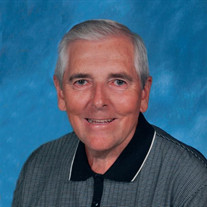 William Alvin “Bill” Bride, the son of William and Lela (Brownmiller) Bride, was born on July 30, 1933 in Kingsley, Iowa.

He attended St. Joseph Grade School, Trinity and graduated from Heelan High School in 1951. Bill then attended Iowa State College and joined ROTC. While at Iowa State, he worked for the Iowa DOT.

He left school to work for Bride and Son’s Construction and then enlisted in the U.S. Army. He transitioned to the Reserves for eight years.

On October 17, 1959, Bill was united in marriage with Marilyn Swanson at Immaculate Conception Catholic Church in Sioux City.

He graduated from the University of South Dakota with degrees in engineering, civil, mechanical, and construction. He then went to work for W.A. Klinger Construction, where he worked for 42 years. During this time, he moved east of Sioux City, where he built his own home and began farming, which he loved.

Bill was passionate about and supported the Sioux City Boys Club, where he was involved for many years.

Bill had a very lengthy and active ball career which spanned more than 60 years. He began playing baseball as a youth and continued into his early adulthood while also developing his love of fast pitch softball.

Bill played first base, where he became known as “#3” or “Billy” for players and fans alike. Bill was extremely competitive in ball and played with all his heart, which made him the ball player he was — winning many state titles and awards.

While his cancer ended his active playing career, he focused on managing and coaching some of the best fast pitch players in the nation, winning the National Men’s Master’s Fast Pitch Championship in 1990, along with many more state championships and other high place showings in national tournaments.

He coached many of his grandchildren’s teams in Little League and passed on some of his skills to them, many adopted #3 as their own. The way Bill lived his life was, “Faith, Family and Fast Pitch.” He was strong in his religious life, he doted on his family (especially the grandkids), and he loved softball.

He was preceded in death by his parents; a sister, JoAnn Jennings; a sister and brother-in-law, Barb and Russ Walters; and an infant sister, Karen.

In lieu of flowers, Bill’s family has requested that memorials be directed to the American Cancer Society, the American Parkinson Disease Association, or the Sioux City Boys Club.