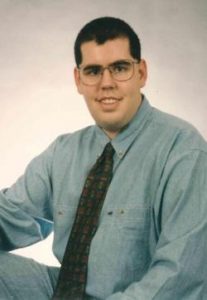 Joseph Stuart McCord was born on May 20, 1975 in Sioux City, the son of Stuart and Beth (Zeiser) McCord.

He graduated in 1994 from  Lawton-Bronson High School. He later attended Iowa Western Community College in the Culinary Arts program.

Joe most recently worked at the Southern Hills Hy-Vee Store in the Deli Department.
Joe was an avid reader who enjoyed sports trivia and comic books. He was a Hawkeye fan and also followed the Pittsburgh Steelers.

A great joy to him was being with his niece Haylee.

Joe is survived by his mother, Beth McCord of Lawton; his sister, Callie (Daymond Pederson) McCord of Sioux City; and his niece, Haylee Pedersen, also of Sioux City.

He was preceded in death by his father, Stuart McCord Jr., who died this past November.