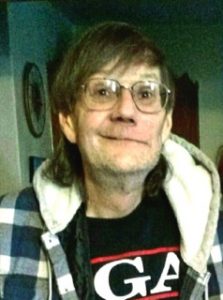 Marc A. Strackbein, age 65, of Holstein, passed away on Monday, December 25, 2017 at the Paula J. Baber Hospice Home of Fort Dodge.

A funeral service was held on Wednesday, January 3, 2017 at 10:30 a.m. at the Nicklas D. Jensen Funeral Home of Holstein with Pastor Kim Dewey officiating.  Burial will be at a later date.

Marc Strackbein was born May 16, 1952 to Edward and Bonnie (Hunwardsen) Strackbein.

Marc was a carpenter, and he did construction work.  He also worked at VT Industries for 10 years and cleaned out turkey buildings until his illness.

He is survived by his sister, Lynette (Terry) Pullen of Schaller, Iowa; his niece, Heidi (Troy) Howard of Holstein, IA; his nephew, Brad (LuAnn) Groszkreuger of Lytton, IA; and several great-nieces and nephews.

Marc was preceded in death by his parents.