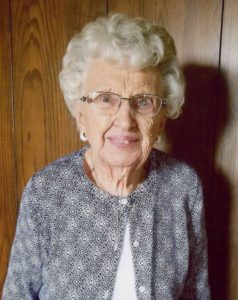 Rowena O. Roepke, 93, of Kingsley, went to her heavenly home to be with her Lord and Savior Jesus on Saturday, December 30, 2017 at her residence.

Funeral services were held at 10:30 a.m. on Thursday, January 4, 2018 at First Lutheran Church in Kingsley, Iowa with Rev. Duane Miesner officiating.  Burial was at Kingsley Cemetery.

Rohde Funeral Home in Kingsley is handling arrangements.  Online condolences may be sent to rohdefh.com.

Rowena grew up in the Union Township area, graduating from Kingsley High School in 1941.

She and Eldon J. Roepke were united in marriage September 12, 1943 at First Lutheran Church in Kingsley, Iowa.

They owned a farm west of Kingsley where they raised their family.   After their children were raised, Rowena and Eldon continued to live on their farm.

Eldon passed away December 27, 2009. After his passing, Rowena continued to live on the farm up to the present time.

Rowena was a lifelong member of First Lutheran Church in Kingsley, where she was very active in church groups and activities.

The world was given a true symbol of God’s love in Rowena, as she touched the lives of all the people that she came in contact with and shared her faith with.

Everyone benefited from her presence and her love and kind heart. She would gladly do anything for her family, a friend, or even a stranger. She emulated the love that Jesus worked in her heart.

Also surviving is a sister-in-law — Mary Koetke of Kingsley, Iowa — and nieces and nephews.

Rowena was preceded in death by her parents; her husband, Eldon; a grandson, Aaron Roepke; a son-in-law, Douglas Wragge; a brother, Merlin Koetke; and a brother-in-law and sister-in-law, Ray and Lois Horsch.