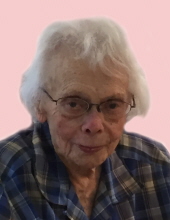 A visitation will be held from 5:00 -7:00 p.m., with a Rosary at 5:00 p.m., Friday, January 19, at the Armstrong-Van Houten Funeral Home of Mapleton, Iowa. Condolences may be sent online www.armstrongfuneral.com.

Elsie Pauline Sanford, the daughter of Frank and Margaret (Meier) Steinbach, was born on June 26, 1921, in Danbury, IA. Elsie was raised in Danbury and graduated from Danbury Catholic School with the class of 1939.

In 1940, Elsie met the love of her life Thomas Sanford in Danbury when they went on a drive through Danbury in his 1931 model A coupe.In the words of Tom, “I asked her if she wanted to go for a drive, she said yes and she got in and never got out”.

On January 15, 1944, the couple were married in Harrisburg, PA.  The couple made their home in Mapleton, IA, and Elsie and Tom were blessed with 5 children, sons Jerry, Larry, Thomas, Robert and a daughter Alice.

Elsie was a wonderful homemaker. Her talent in cooking and baking was noted by her delectable lemon meringue and sour cream raisin pies.

She was a faithful member of St. Mary’s Catholic Church of Mapleton, where she served as a guild leader.

Elsie enjoyed going snowbirding in Arizona for years with Tom. She like going square dancing, canning, and took trips to Alaska and New York.

Elsie was an accomplished seamstress who loved to upcycle towels, P.J.’s, and other fabrics into Barbie and doll clothes for her granddaughters. The classic sock monkey was always a favorite among her grandchildren, along with her delicious cookies.

A devoted wife, mother, grandmother, great-grandmother and friend, Elsie will be missed for her generosity, kindness, and joyful smile that could fill a room.