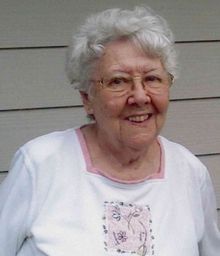 Services were at 1 p.m. on Saturday, January 13 at First Lutheran Church in Kingsley, with the Rev. Duane Miesner officiating. Burial was in Kingsley Cemetery.

Arrangements are under the direction of Rohde Funeral Home in Kingsley. Online condolences may be sent to rohdefh.com.

Mary Lou Pittmann was born on August 12, 1927 in Sioux City, Iowa, the daughter of Erastus and Neva (Swanger) Jones.She grew up in Sioux City and later moved with her mother to Los Angeles, California as a teenager.

She attended Alexander Hamilton High School, graduating in 1945. After high school, she worked at MGM Studio and met famous personalities such as Elizabeth Taylor and Frank Sinatra, to name a few.

She would travel back to Sioux City to visit numerous aunts, uncles and cousins. After moving back to the Sioux City area, she worked at The Sioux City Journal.

On November 21, 1948, she married Alvin F. Pittmann in Sioux City. After their marriage, Mary and Alvin lived on a farm outside of Kingsley, where they raised their family.

Mary and Alvin farmed for 51 years before retiring. Mary taught Red Cross swimming lessons at the Midway, located between Kingsley and Moville on Highway 140.

She was an active member of First Lutheran Church, where she served as president of the LWML.

She and her husband, Alvin, enjoyed golfing when they got a chance to do so. Occasionally, they volunteered for the LPGA and PGA.

Mary also volunteered at the Sony Open in Hawaii. She and Alvin took countless fishing trips to Minnesota and to the coast of Quintana Roo, Mexico, and also to Padre Island, Texas.

Mary was a loving wife, mother, grandmother and great-grandmother.

She was preceded in death by her parents; her husband, Alvin; her sister, Joyce; and her brother, Richard.
Memorials may be directed to the Lutheran Camp in Okoboji, Iowa, c/o of First Lutheran Church in Kingsley.

The family would to thank the staff and volunteers of Kingsley Specialty Care for their compassionate care to our mother, Grandma Mary, and Great-Grandma Mary.