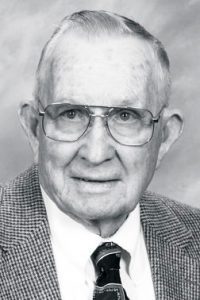 Services were held at 10:30 a.m. on Tuesday, January 30 at Community Presbyterian Church in Lawton, with the Rev. David Koehler presiding. Burial was in Banner Township Cemetery.

Arrangements are with Morningside Chapel,  Christy-Smith Funeral Homes, in Sioux City. Online condolences may be left for the family at www.christysmith.com.

Lawrence was born on August 10, 1917, to Lawrence Jefferson and Zelma (McCleery) Edwards, near Correctionville, Iowa. He attended country school through seventh grade and graduated from Correctionville High School in 1936.

He was united in marriage with Phyllis Wright on January 1, 1940 in Sioux City. They started farming and rented 80 acres near Correctionville. The first farm they purchased was 320 acres between Moville and Lawton in 1944. They bought a farm on Highway 20 between Lawton and Sioux City in 1975.

In 1943, Lawrence decided to try the purebred hog business, when a neighbor had offered him a Poland sow. It was the beginning of a long, successful purebred Black Poland China hog business with his wife, Phyllis.

Lawrence enjoyed showing his hogs at county and state fairs, where he won many top prizes.

He sold purebred hogs to farmers in many states and had international sales to Canada, Mexico, and Taiwan. After 62 years, he retired from raising and selling hogs when he was 79 years old.

Lawrence loved his community, and he participated in community endeavors. He served many years as Lawton Pee Wee baseball coach, a Lawton School Board member, a Banner Boosters 4-H leader, a church usher, and the Woodbury County Fair Board. He was County Pork Producers founding member.

He was a super Lawton-Bronson sports fan and was given a special Sportsmanship Award twice at the Iowa Girls State Basketball tournament.

He also was a fan of Morningside College, the Iowa Hawkeyes, and the St. Louis Cardinals. He bowled in leagues, tournaments, or jackpots until his 95th birthday.

He was preceded in death by his wife, Phyllis; his son, Jim; a grandson, Christopher Marlette; a sister, Lela; and four brothers: Cecil, Lloyed, Leslie, and Oral.