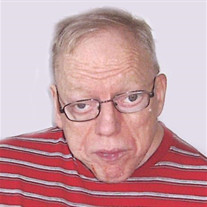 A funeral will be 2:00 pm Friday, February 2, 2018, at Christy-Smith, with burial to follow in Arlington Township Cemetery in Moville, Iowa.

Keith Orren Taylor, the son of Orren and Leota (Mullikin) Taylor was born September 18, 1955, in Bronson, IA. He went to school in Climbing Hill and Sioux City and graduated in 1979 from Pupil Services.

Keith worked at NPI and Mid Step Services. He lived on the family farm near Bronson until 1980 when he went to live in a Mid Step group home.

Keith was living at Bluff View Group Home until January 9, 2018, when he moved to Embassy Nursing Home in Sergeant Bluff, Iowa.

Keith enjoyed radios, trips out with family, and his favorite place, Taco Johns, for Mexican food.

Left to cherish his memory is his brother, Bruce (Pat) Taylor of Bronson, IA; a sister, Marilyn (Henry) Dannettel of Lawton, IA; many nieces and nephews; and his friends at Bluff View Group Home.

The family would like to thank all of Keith’s caregivers over the years. He enjoyed visiting with them and hearing about their lives.