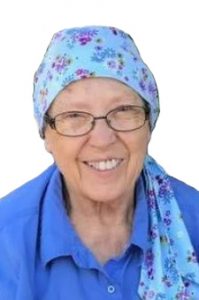 Maxine M. Mullicane, age 79, of Anthon, Iowa, passed away Wednesday, February 7, 2018, surrounded by her loved ones at her residence in Anthon, Iowa.

A private family service was held on Sunday, February 11, 2018. Pastor Karen Handke officiated.
Burial will be held at a later date in the Oak Hill Cemetery, of Anthon, Iowa.

Maxine Mildred Mullicane, the daughter of Walter and Sarah (Bulten) Backer, was born on January 4, 1939.  Maxine grew up in Mapleton, Iowa, and graduated from Mapleton High School with the class of 1957.

On May 3, 1962, Maxine married the love of her life Jerry “Pete” Mullicane in Anaheim, California. There, they were also blessed with their three kids: Donna, Jimmy, and Jerry.

Maxine was no stranger to hard work. She worked as a waitress and switchboard operator, along with other various jobs throughout her lifetime.

Maxine’s true pride in life was her family and being a homemaker.  With a heart of gold, Maxine’s door was always open to anyone in need.

To those who knew her, they will remember her for her compassion and contagious smile that could light up any room.

In her free time, Maxine enjoyed meeting new people, playing the game of Bingo, and spending time with her family and friends.

Left to cherish her memory are her children: Donna (Eric Johnston) Mullicane-Johnston of Anthon, IA; Jerry Mullicane of Anthon, IA; and James “Jimmy” (Karen) Mullicane of Anaheim, CA;  her grandchildren: Branden, Ashley, Karyssa, Megan, Lisa, Dominque, and Kendra; her step-grandsons: Kenny, Seth and Gabe; her great-grandchildren: Rylee, Lucas, Kolten, and Avery, and a granddaughter to come in June of 2018; her brothers, Ernie Backer and David Backer; a sister, Roxanne Devlin; and numerous cousins, nieces, nephews, extended family and friends.