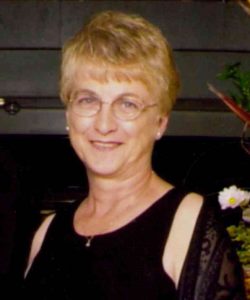 Sharon D. Hendricks, 77, of Sioux City, passed away peacefully on February 10, 2018, surrounded by her loving family.

Arrangements are with Rohde Funeral Home (101 W. 2nd Street in Kingsley). Online condolences may be made to www.rohdefh.com.

Sharon was born on March 4, 1940, to Kenneth and Dorothy (Herbold) McConnell in rural Kingsley, Iowa.  She graduated from Kingsley-Pierson High School in 1958.

She married her best friend — the love of her life, Larry Hendricks — on March 8, 1959.  They lived in Sioux City, where Sharon worked at Northwestern Bell until they started their family.  They were blessed with three daughters.

Sharon was a stay-at-home wife and mother until the girls were grown.  She worked at Diamond Vogel, Van Dyke-Bzoski Insurance and Mills-Shellhammer Insurance.

Sharon “Blue Eyes” enjoyed many friendships including her Friday night couple’s group, the Tuesday night golfers, and the mall walkers club and card clubs at the golf courses.

Some of her hobbies were golf, bowling, and nurturing her beautiful flower gardens with Larry.

Sharon’s greatest joy was spending time with her grandsons and her family.

Sharon was a charter member of Peace Reformed Church, and she enjoyed her many friends at church.

Sharon was preceded in death by her parents and her brother-in-law, Robert Tenboer.