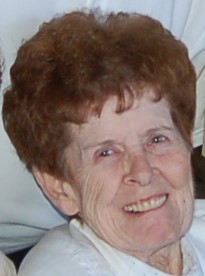 Margaret J. Anderson, age 81, of Holstein, formerly of Cushing, passed away on Friday, February 2, 2018 at the Good Samaritan Society of Holstein.

A private family graveside service will be held at the Cushing Cemetery of Cushing.

Friends are invited for a time of fellowship and luncheon on Saturday, February 24, 2018 at 12:30 p.m. at the Boulders Inn & Suites Event Center of Holstein.

Margaret was born on July 8, 1936 in Omaha, Nebraska.  She was the daughter of Lee and Mary Lou Kane, and she was one of 11 children.

She married William (Bill) Anderson on January 8, 1959, and they spent the next 32 years together.

They raised a family of five children: Peg, Jim, Bill, Pat, and Ken.  With the exception of some periods in Oregon and Florida, most of their time was in Iowa. They moved to Cushing in 1970.

After all their children graduated from school, they moved to Las Vegas, Nevada in 1982.  In 1989 they moved back to Holstein, Iowa, where they stayed until Bill passed away in 1991.

Margaret then moved back to Las Vegas, Nevada and she eventually settled in Pahrump, Nevada.

She kept herself busy tending to her many trees, shrubs, and gardens, which she took great pride in.  She also enjoyed the occasional trip over to Las Vegas.

Margaret is survived by four children and their spouses: Peg and Dan Gebers of Holstein, IA; Bill and Deb Anderson of Warsaw, MO; Pat Johnson of Tucson, AZ; and Ken and Mary Anderson of Urich, MO.

She is survived by two sisters, Mary Lou and Lea, and four brothers: Ed, Tom, Dan, and Jim.

Margaret was preceded in death by her parents; her husband Bill; her son Jim; and her sisters: Kate, Evelyn, Pat, and Helen.