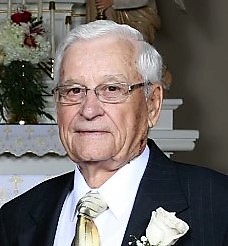 Bob was born January 27, 1934, in rural Kingsley, Iowa, the son of John and Kathyrne (Streck) Seuntjens.

Bob grew up in the Kingsley area, graduating from Kingsley High School in 1952. He then attended the University of Iowa until 1954.

Bob and Doris Ruba were united in marriage on February 11, 1958 at St. Mary’s Catholic Church in Remsen, Iowa.  After their marriage, Bob and Doris lived on farm east of Kingsley, where they raised their family.

Bob was a member of St. Michael Catholic Church in Kingsley and the Knights of Columbus.

Preceding Bob in death were his parents; two sisters, Arlene Bird and Dorothy Okeefe; and a brother, Mick Seuntjens.