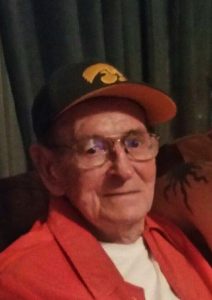 Burial followed at the Alcock Cemetery, with military rites provided by Brandenburg-Krueger Post #4013, V.F.W. of Tripoli.

Orville Raymond Duecker, son of William and Irene Shufelt Bieman, was born March 23, 1925 at Tripoli, Iowa. He was baptized and confirmed at St. John Lutheran Church in Frederika, and he graduated from Frederika High School.

He entered the U.S. Navy in 1943, and served on the Aircraft Carrier U.S.S. Franklin, which was attacked in the Sea of Japan and lost many sailors. Orville was one of the survivors, and he was awarded the Purple Heart.

In July of 1946, he was united in marriage with Clara Luck at Hiawatha, Kansas. Orville graduated from the University of Iowa College of Pharmacy in 1955.

The couple owned and operated a pharmacy in Anthon, Iowa for many years, and Clara worked with her husband.

In the mid 1970’s, they returned to northeast Iowa where they made their home in Waterloo before moving to Frederika, where Orville served as mayor.  A short time ago, they moved to Lisbon to be near their son.

Following Clara’s death in 2013, Orville continued to make his home in Lisbon. He was a lifelong member of the Lutheran faith.

He had the habit of mastering a hobby and moving on to something new.

In addition to his wife and parents, he was preceded in death by a half-brother, Larry Duecker.

In lieu of flowers, memorials may be made to St. John Lutheran Church in Frederika.