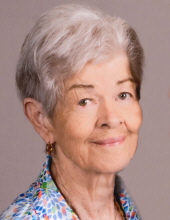 A Funeral Service was held at 10:30 a.m. on Friday, March 2, 2018 at the United Methodist Church of Anthon, Iowa. Rev. Sheryl K. Ashley  officiated, with Committal Services following in the Oak Hill

The Armstrong — Van Houten Funeral Home of Anthon, Iowa is in charge of the funeral arrangements. Condolences may be sent online www.armstrongfuneral.com.

Rosalie “Rosie” (Clark) Hunwardsen, the daughter of Roger and Kathryn Clark was born on May 29, 1936 in Sioux City, Iowa. She grew up in the Washta, Iowa area, where she received her education from first through the fifth grade at Grand Meadow and graduated from Washta High School with the class of 1954.

After high school, Rosalie worked as a telephone operator in Washta and Cherokee from 1955 to 1957.

On November 27, 1955, Rosalie married the love of her life Dale Hunwardsen, in the United Methodist Church of Washta, Iowa.

Rosalie and Dale moved to Amarillo, Texas, were Dale was stationed on an Air Force base. She started working as a telephone operator for SW Bell from 1957-1961 and then for NW Bell from 1961-1966.

The couple were blessed with four children: David, Kevin, Michael, and Michelle “Shelley”.

The family relocated to Sioux City, Iowa in 1961 and then to Anthon, Iowa in 1966. In 1969 the family built a new home, where they have made their family home up to the present.

Rosalie worked from 1987-1997 for MCI in Sergeant Bluff, Iowa until she retired in 1997. She also drove children to and from school in the school van for five years.

In her past time, Rosalie enjoyed crocheting, walking, spending time with her family and taking vacations with her sisters and her husband, Dale.

Rosalie was a devoted wife, mother, grandmother, and great-grandmother. She never knew a stranger, and with her heart of gold, she always put others first — especially her family, which she held close to her heart.

Rosalie was preceded in death by her parents, Roger and Kathryn Clark; a brother, Tom Clark; sisters Susan Winters and Janet (Ted) Lockwood; her parents-in-law, Otto and Ella Hunwardsen; a brother-in-law, Ron Johnson; and a sister-in-law, Vera (Burdette) Lorenzen.