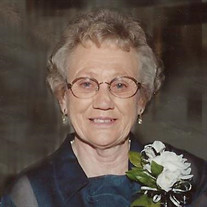 Pearl Catherine Fritz, the daughter of Frank and Ethel (Cutter) Fritz, was born on Feb. 6, 1926, in Gann Valley, South Dakota. She was educated in a country school and then high school in Fedora, South Dakota.

On March 29, 1946, Pearl was united in marriage with Floyd Forst in South Dakota. The couple moved to Hornick, and later to Bronson in 1947.

Pearl worked as a postmaster in Sioux City and Bronson for over 18 years, retiring in 1985.

Pearl was a member of Bethel Lutheran Church in Lawton, Iowa. She enjoyed quilting and gardening.

Pearl was also fond of flowers and birds.

Pearl is survived by her sons, Curtis (Judith) Forst of Howard Lake, Minnesota and Ed (Deb) Forst of Bronson; ten grandchildren; five great-grandchildren; a sister, Rose Hallenbeck of Loveland, Colorado; and many other relatives and friends.

She was preceded in death by her parents; her husband; a daughter, Kathy; and 13 brothers and sisters.