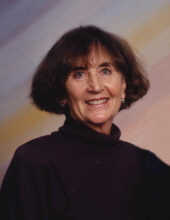 A Celebration of Life service was held at 8:00 p.m. on Friday, March 23 at the St. John’s United Methodist Church of Mapleton. Rev. Jena Manchester and Father Anthony Wagner officiated.

Committal Services were held on Saturday, March 24, at 11:00 a.m. in the St. Mary’s Catholic Cemetery of Oto, with Father Michael Keating officiating.

The Armstrong – Van Houten Funeral Home Mapleton, Iowa is in charge of the funeral arrangements.

She graduated from Oto High School with the class of 1953. During her high school career, she enjoyed cheerleading and playing basketball.

After high school, Geraldine went on to further her education at Wayne State College and obtained her Medical Technician degree in Minneapolis.

The couple lived in Minneapolis and Reedsburg, Wisconsin before returning to Oto, where the couple began farming. They raised their three children on the farm, which would be her home base throughout her life.

Geraldine would return to the farm from her travels to Arizona and Florida and international trips to Ireland, the origin of her Irish roots.

Geraldine was known as a dedicated grandmother and cheerleader for all of her grandchildren, as well as for her loyalty and support to her lifelong friends. She enjoyed dancing, playing cards and sharing many laughs.

A devoted Catholic, she volunteered helping with the Altar Society and Catholic Daughters of America.

Geraldine was preceded in death by her husband, Kenneth Volk; her parents, Matthew and Florence Drea; and her brother, Michael Drea.