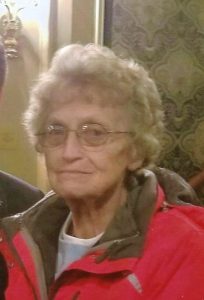 A funeral Mass was held on Wednesday, March 28, at 10:30 a.m. at the St. Joseph’s Catholic Church of Anthon with the Msgr. R. Mark Duchaine officiating.  Burial will be at the Mount Saint Joseph’s Cemetery of Anthon.

Edna Lee Cunningham was born August 27, 1933 in Sioux City, Iowa to Carl and M. Ruth (Guthridge) Petersen. She was one of 17 children.  She attended Moville High School.

Edna was united in marriage to Charles “Frank” Cunningham on December 2, 1958.  To this union, six children were born.

She enjoyed her job as a mother, grandmother and great-grandmother, as well as the 30 years spent working alongside her husband in their business, the Miracle Mile Inn in Moville.

Edna was a longtime member of St. Josephs Catholic Church in Anthon where she was a past member of the St. Joseph’s Altar Society.  Edna was nominated to be named “Volunteer of the Year” at Siouxland Dialysis in 2000-2001.

She loved playing Bingo and often drove her friends to Holstein, Ida Grove, Mapleton and Kingsley to play and volunteered in Anthon for many years.

She enjoyed playing cards, tending to her flower garden, attending concerts and her weekly trips to the casino.

She was very close with her family and loved to see her grandchildren and great-grandchildren for visits and activities.

She is survived by her children: Shon Cunningham of Anthon, IA; Ruth Moody of Moville, IA; Kathy (Chris) Jacobsen of Anthon, IA; Loann (Garry) Smith of Lenox, IA; and Lorna (Jeremy) Lukins of Holstein, IA; 16 grandchildren; 27 great-grandchildren; and one great-great-grandson.  She is also survived by 12 brothers and sisters and her beloved companion — her dog, Lucy.

Edna was preceded in death by her parents; her husband, Frank; her daughter, Beth; two brothers, Pete and Dan; and two sisters, Bonnie and Janna.