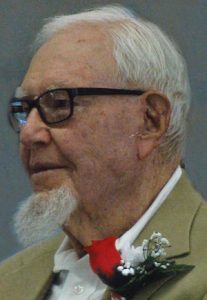 Memorial services will be held at a later date. Morningside Chapel, Christy-Smith Funeral Home is assisting the family with arrangements.

Leland lived with his family on a farm near Luton, Iowa. At the age of 14, he traveled alone to California for an adventure and to spend time with relatives.

He returned to attend East High School in Sioux City, and graduated in 1938. He attended the University of Iowa before returning to farm for himself.

Leland married the love of his life, Helen Roepke, on January 30, 1943 in Fremont, Nebraska. This was a union that lasted 75 years and included three children: Charlene, Leland Jr., and Myron.

They lived in Kingsley while Leland worked as an insurance agent for State Farm Insurance.

Missing the farm life, they returned to a place near Kingsley, where they raised crops and had an extensive cattle operation that extended to several states. They remained on the farm until retirement in 1994.

During retirement, they traveled between their two homes in Mission, Texas and Wabigoon, Canada, where they met many wonderful friends.

Leland loved the many lakes of Canada, and he was happiest with a fishing pole in his hand. Ever the farmer, he grew a huge garden and shared many vegetables with family and friends.

Leland was a member of Kingsley Masonic Lodge, where he was honored with a 50-year membership pin. He belonged to the Abu Bekr Shriners in Sioux City. He served as Worthy Patron of Eastern Star in 1971 and 1972.

He was also a member of Kingsley United Methodist Church for over 50 years.

He is survived by his wife, Helen; his children, Charlene (Chuck) Wikstrom, Leland Sargisson Jr., and Myron (Mary) Sargisson; nine grandchildren; 16 great-grandchildren; many nieces and nephews; and a host of friends.

Leland was preceded in death by his parents, Paul William and Della (Johnson) Sargisson.