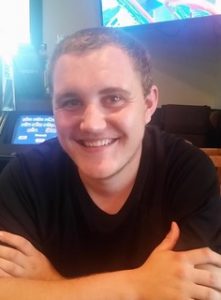 A funeral Mass will be held on Friday, April 6, 2018 at 10:30 a.m. at Immaculate Conception Church of Moville with the Msgr. R. Mark Duchaine officiating.  Burial will be at the Arlington Cemetery of Moville.

Riley Christian Grell was born on February 25, 1998 to Abby and Jeff Grell in Sioux City, Iowa.  A lifelong resident of Moville, Riley graduated from Woodbury Central High School in 2016.   Riley was employed for the past year at the Singing Hills Auto Spa in Sioux City.

Riley had a great love of animals, fishing, skateboarding, hunting and video games.  He was interested in world affairs and right-wing politics.  He had an infectious smile and ended every conversation with “I love you.”

Riley was a young man with contagious laughter, a grand knowledge of oddities and the softest heart towards animals and so much more.

He was preceded in death by his grandfather, Dennis Whittecar; his great-grandparents, Clarence and Margaret Mayer, Spike and Esther Whittecar, Gilbert and Ruby Uhl, Arnold and Molly Grell; and Micho, his beloved chocolate lab.