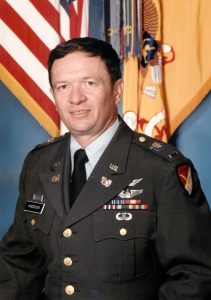 A gathering of family and friends for Jon will be held on Friday, April 13, 2018 from 5:00 pm until 8:00 pm at Dunbar Funeral Home, Devine Street Chapel. Interment will be held at a later date at Willow Township Cemetery in Holly Springs, Iowa.

Jon was born on September 4, 1940 in Sioux City, Iowa, to J. Bruce and Georgette Haddock. He was a graduate of Holly Springs-Hornick High School & the University of Nebraska-Omaha.

Jon was commissioned as a Second Lieutenant  in the Iowa Air National Guard in June of 1962.

He was a member of the 185th Tactical Fighter Group, which was activated in January of 1968 in support of the Vietnam War.

After departing active duty in 1969, Jon and wife Sue returned to farming in Iowa and began their family.

In 1980, he resumed active duty as a Chief Warrant Officer in the U.S. Army including service in Operations Desert Shield and Desert Storm before retiring in August of 1994.

In his 30 years of military aviation, his favorite aircraft were the F-100 Fighter Jet and the Blackhawk Helicopter.

Jon was known for his sense of humor and his pride for his four girls.

In addition to his parents, he is predeceased in death by a sister, Marilyn Haddock Evans; a brother, Ronald Haddock and a granddaughter, Kathryn Bigwarfe.

In lieu of flowers, memorial contributions may be made in Jon’s honor to the Boys and Girls Home and Family Services, Inc (PO Box 1197, Sioux City, IA 51102).