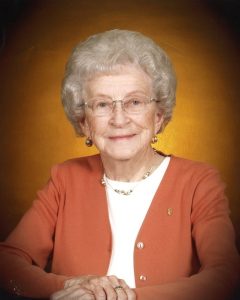 Opal L. Bremer, age 95, of Holstein, passed away on Wednesday, April 4, 2018 at the Good Samaritan Society of Holstein.

A funeral service was held on Tuesday, April 10, 2018 at 1:30 p.m. at the United Methodist Church of Holstein with the Rev. Doresa K Collogan officiating.  Burial was at the Holstein Cemetery of Holstein.

Opal Loretta (Beeson) Bremer, daughter of Henry and Lottie (Pierce) Beeson, was born on the family farm south of Correctionville on April 25, 1922.  She was the baby of seven children.

At an early age she learned to work and help on the farm, always loving the outdoors and the animals.  She attended country school during her early years and later graduated from Correctionville High School May 23, 1941.

On February 5, 1943 Opal was united in marriage to Leroy Bremer of rural Cushing at Dakota City, Nebraska.

To this union, five children were born: Kenneth, Donna, Robert, Donald and Lana.

The couple joined the Methodist Church in Cushing, where the children were baptized.  They began farming west of Cushing until 1966, when they moved south of Holstein.

Retirement came in 1987 when they moved in to Holstein.

As a student, Opal enjoyed participating in school plays and excelled at Spelling Bees.  She taught country school before becoming a full-time farm wife and mother.

Opal enjoyed horses, baking, dancing, playing cards and the many activities of the grandchildren.

She was a member of the United Methodist Women, the Mary Circle, the Lone Star Homemakers Club and the American Legion Auxiliary.

Opal was preceded in death by her husband; her parents; a son, Robert; grandsons Todd and Wayne Bremer and Matthew and Michael Conover; three sisters and their husbands: Ella and Archie Thompson, Lenora and Thomas Murphy, and Mayme and Lowell Hobbs; three brothers and two sisters-in- law, Lewis and Loretta Beeson, Ray and Verda Beeson, and Harold Beeson.