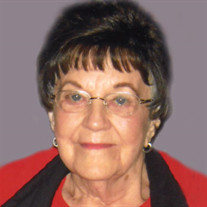 Burial was in Calvary Cemetery in Sioux City. Arrangements are under the direction of Christy-Smith Funeral Homes, Morningside Chapel.

Corleen was born on January 3, 1922 in Anthon, Iowa, the daughter of Cornelius and Gertrude Walling.

She was raised and attended school in Anthon and graduated from Anthon High School. She received a teaching certificate at Wayne State College, and taught school at various country schools.

Through their 56 years of marriage, they made their homes in Long Beach, California and Ute, Climbing Hill, Moville and Sioux City, Iowa. She was a devoted wife, mother and homemaker.

Corleen was an active member of Immaculate Conception Church. She passes onto her family the cherished gifts of endurance, fortitude, strong faith and power of prayer.

She enjoyed earlier years of travel, crafts, puzzles and spending time with loved ones. Her daily walks and exercising attributed to her longevity. She won the Senior Walk Across Iowa competition at the age of 84.

Our beloved Mother, Grandmother and Sister will be greatly missed. The family would like to extend a special thank you to her outstanding Hospice caregivers: Dani, Jessica and Bev.

Memorials in her name may be made to Mater Dei Immaculate Conception Church in Sioux City, Iowa.