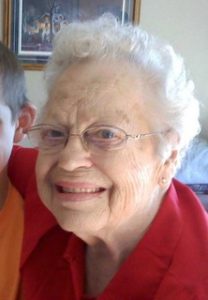 A funeral service was held on Thursday, April 19, 2018 at 2:30 PM at the Grace United Methodist Church of Correctionville with the Pastor Ron Rice officiating.  Burial was at the Correctionville Cemetery.

Betty was united in marriage to H. Duane Burns on March 27, 1947.  To this union, six children were born.

Duane and Betty lived in Washta from the late 1990’s until 2015, when she moved to the nursing home.

Betty’s grandchildren were everything to her and she was extremely proud of them.  She loved gardening, raising chickens and helping on their farm.

Betty enjoyed bowling, dancing, playing cards and gambling on occasion.  She treasured the many hours in the company of her mother and her sister Annie.

She is also survived by two brothers, Lester (Janet) Levin and Arnold Levin; a sister, Janet Brown; and many nieces and nephews.

She was preceded in death by her parents; two sons, Robert and Dickie Burns; a grandson, Ryan Griep; two great-grandsons; a sister, Annie Smith; a sister-in-law, Janice (Brown) Levin; and a brother-in-law, Gary Brown.