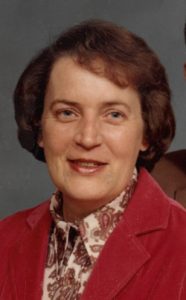 Services were held at 1:00 p.m. on Tuesday, April 24, 2018 at St. James United Methodist Church with Rev. Eric Sayonkon officiating. Condolences may be given at www.meyerbroschapels.com.

Gale was born April 8, 1939 in Le Mars, Iowa, the daughter of Howard T. and Jennie (Kissinger) Page. She was raised in Kingsley, Iowa and graduated from high school there in 1957.

Gale attended Wayne State College in Nebraska for a freshman year. Then she and Marlin F. Noble — a 1956 Kingsley High School graduate — were married on May 31, 1959 at the Congregational Church in their hometown.

The couple made their home in Sioux City, Iowa, welcoming their son David in July 1960 and their daughter Beth in October 1962.

When their children reached school age, Gale returned to the workforce, holding many varied jobs over the years — from food services to clerical, to secretarial, to office administration. She made many lifelong friendships during her career life.

Gale’s hobbies included sewing, some scenic oil paintings & painting wooden caricatures made by her spouse, which she enjoyed selling at craft fairs. She was a reader of mystery novels and worked word puzzles for pleasure.

She and Marlin lovingly reared their 18-month-old granddaughter during much of their retirement years, until Gale’s serious health issues made her unable to continue performing the duties required by young 12-year-old Jessica.

In their early retirement years, she and her spouse shared traveling to visit relatives and friends in various U.S. locales.

They later shared a Caribbean Cruise, and during it the first movie shown was “A Perfect Storm.”

Her life was filled with abundant joys and sorrows which formed a caring, generous, and compassionate soul. She will be dearly missed by those who knew & loved her.

She was preceded in death by her parents; her husband; her daughter, Beth; and her son, David.