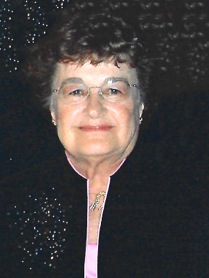 A funeral service was held Monday, April 23, 2018 at 11 a.m. at the United Methodist Church of Moville with Rev. Janet Rieckhoff-Faris officiating.  Burial was at Arlington Cemetery of Moville.

She graduated from Moville High School in 1950. She later took classes at Morningside College.

She was united in marriage to Clifford Cox on October 6, 1951 in El Paso, Texas.  They were blessed with three daughters: Margo, Mona and Marla.  Roberta and Clifford raised their family in Moville, Iowa.

Roberta worked for MidAmerican Energy (IPS) and as an auditor and administrator of CIS group for 23 years.

She was a founding member of the Evangelical Church with many years of service as a Sunday school teacher and Superintendent of Sunday school, past president of Evangelical women’s group, past financial secretary and church treasurer.

She was a hospice bereavement volunteer and a member and volunteer of the Moville Senior Center.

Roberta was a member of the Red Hat Society.  She enjoyed camping, card games, board games, Mahjong, dominoes and spending time with family.

Roberta was preceded in death by her parents, her husband, three brothers, and four sisters.