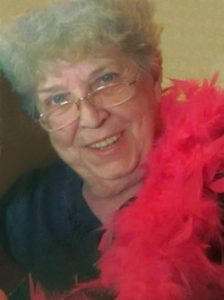 It was September 30, 1938 when Betty Jane  Henneous entered into this world at home, on the family farm, located on the James Blacktop, west of Kingsley, Iowa.

Betty Jane was the youngest in the family of five children born to Lyle Franklin Sturtevant and Alma Jane (Tucker) Sturtevant.

On Thursday, May 10, 2018, Betty Jane (Sturtevant) Henneous passed from this earthly existence, surrounded by her family at her home in Hornick, Iowa. She had dealt with the complexities of COPD for 10 years.

It was her wish to be cremated. All arrangements are under the very capable and caring hands of Meyer Brothers Colonial Chapel on Hamilton Boulevard in Sioux City, Iowa.

To honor Betty’s non-traditional life, a Celebration of Life event was held at the funeral home Thursday, May 17, 2018 at 7 p.m. Interment will be at a later date. Condolences may be sent to the family at meyerbroschapels.com.

Betty was a Jill-of-many-trades and passions. Her favorite was that of a team, driving truck with the love of her life, her husband Rich, who passed away unexpectedly on February 18, 2008.

She often spoke with pride and gratitude of her brother, Donald, who taught her how to drive truck.

She had lived in many diverse areas of our great nation before settling in the Holly Springs/Hornick area.

Betty traveled the open roads throughout 49 of these 50 United States and several Canadian provinces, even taking their truck to New Brunswick by ice-breaker ferry, and into many areas of Mexico. The open road experience gave her a unique perspective and understanding of this thing called life.

Those who went before her include her husband, Richard Henneous; her parents, Lyle & Alma Sturtevant; her sister Fern (Sturtevant) Hartman; her brothers Verlin, Donald and Clarence (CG/Kelly) Sturtevant and his wife Maxine (Kinnamen/Means) Sturtevant; her nieces, Cindy Sturtevant & Zana (Sturtevant) McHarg; and her nephew Paul Sturtevant; along with too many of her other family members and dear friends.

Betty is grandma to 5 and great-grandma to 14 beautiful young people for whom she had a deep and never-ending love, and many other family members and friends, all of whom will miss her sharp wit and no-holds-barred commentaries and conversations.

A very special Thank You goes out to Shannon, Jenny, Rachel and Nikki. Without their care, concern, time and talents, Betty’s final wishes would never have been fulfilled.

It is requested that donations made in Betty’s name may be directed to Burgess Hospice, Onawa, Iowa; Noah’s Hope Animal Rescue, Sioux City, Iowa; the Siouxland Humane Society, Sioux City, Iowa; or Friends of Felines’ Rescue Center at FOFRescue.org.