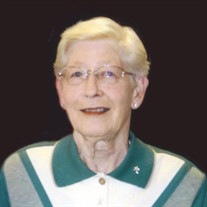 Helen L. Eberly, 87, of Lawton, passed away on Sunday, May 13, 2018, at Pioneer Valley Living and Rehab Center in Sergeant Bluff.

Memorial services will be 7 p.m. on May 16 at Larkin Chapel, Christy-Smith Funeral Homes (2320 Outer Drive N. in Sioux City).

Helen was born to Ferdinan and Irene (Fear) Rasmussen on Jan. 26, 1931, in Bronson, Iowa. She attended grade school in Bronson and graduated from Lawton High School in 1949.

Helen married H. Everett Eberly on Sept. 2, 1949 at the Presbyterian Church in Lawton. They lived in Sioux City for a short time, then moved to Lawton.

Mr. Eberly passed away on Feb. 17, 2002. Helen worked for Herbold Realty for a number of years.

She enjoyed crossword puzzles and watching TV. She appreciated her family, and loved spending time with her dog, Ellie.